California – the Most Populous State in The United States

California has so many sights and scenes – from deserts to mountains to the Pacific Ocean and all the cities, people, and places therein.

I live in California so this section is devoted to information about the state.

Depending on where you live in the state, some destinations you can drive to. While others you can fly directly to if they are in any of the larger cities.

100 Things To Do In California

According to the Sacramento News & Review, California’s population will increase to 50 million people by 2025. It is now 39.5 million people as I check Wikipedia in March 2018.

California adds around 400,000 people a year according to the State Population Bureau.

More than 12 percent of U.S. citizens live in California. Its population is greater than that of all but 34 countries. The state has eight of the top 50 US cities in terms of population.

Los Angeles is the nation’s second-largest city with a population of 4,018,000 people. 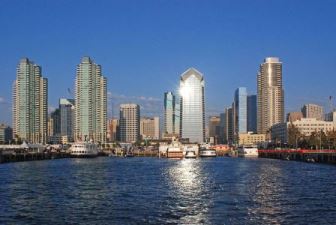 San Diego downtown in the afternoon. Click image to enlarge.

Los Angeles County has held the title of most populous county for decades. It is more populous than 37 US states. Note these statistics may have changed slightly.

The state contains extremes in elevation. Mount Whitney rises to 14,505 feet (4,421 meters). It is the tallest mountain in the lower 48 states.

Death Valley at almost 300 feet below sea level being the lowest elevation.

The climate varies from Mediterranean to subarctic. A large part of the state has a Mediterranean climate, with cool, rainy winters and dry summers.

Along the Pacific coast there is often summer fog. The fog sometimes extends inland for many tens of miles. Farther inland you will encounter colder winters and hotter summers.

In Northern California and upper parts of the state average higher annual rainfall than the south. California’s mountain ranges influence the climate as well.

Some of the rainiest parts of the state are west-facing mountain slopes. Northwestern part of the state has a temperate climate.

The Central Valley has a Mediterranean climate but with greater temperature extremes than the coast. Its high mountains, including the Sierra Nevada, have an alpine climate.

They have snow in winter and mild to moderate heat in summer. Sometimes, however, there is not enough snow or rain and the state has a severe drought.

California is bordered to the north by Oregon. Nevada is to the east. Arizona is southeast and Baja California, a state of Mexico, to the south.

California has wide ranging geography. It ranges from the Pacific Coast in the west, to the Sierra Nevada mountains in the east.

In the northwest – from the Redwood–Douglas-fir forests. The Mojave Desert areas are in the southeast.

In the center of the state is the Central Valley, a major agricultural area. California also contains both the highest and lowest points in the contiguous United States. Highest is Mount Whitney. Lowest is Death Valley.

We don’t receive wisdom; we must discover it for ourselves after a journey that no one can take for us or spare us. – Marcel Proust

California has a Long Coastline and Lots of Earthquakes

The state has the 3rd longest coastline of all states (after Alaska and Florida). Earthquakes are a common occurrence. That’s due to the state’s location along the Pacific Ring of Fire. About 37,000 earthquakes are recorded annually. 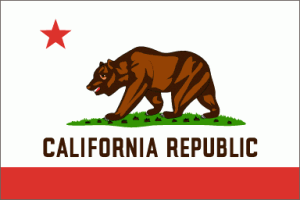 Nearly 45 percent of the state’s total surface area is covered by forests. Its diversity of pine species is unmatched by any other state.

California contains more forestland than any other state except Alaska. Many of the trees in the California White Mountains are the oldest in the world.

One Bristlecone pine has an age of 4,700 years. Many others are hundreds to thousands of years old.

In the southern part of the state is a large inland salt lake, the Salton Sea. The south-central area is a desert called the Mojave Desert.

Northeast of the Mojave Desert is Death Valley. Its the lowest and usually the hottest place in North America being 282 feet below sea level.

Almost all of southeastern California is arid, and hot desert. It has routine extreme high temperatures during the summer. The southeastern border of California with Arizona is the Colorado River.

The southern part of the state gets about half of its water from there.

In 2010, for the first time since the California Gold Rush in the mid 1800s, California-born residents make up the majority of the state’s population. 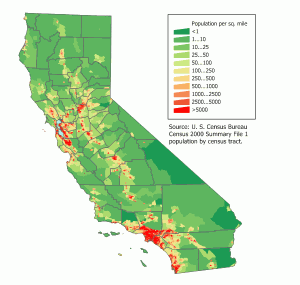 In 2011, the state saw a shift in its immigration pattern. It now has more people coming from Asia and less from Latin America.

The state’s population of undocumented immigrants has been shrinking in recent years. Its due to increased enforcement and a slumping economy.

The number of migrants arrested attempting to cross the Mexican border in the Southwest plunged from a high of 1.1 million in 2005 to just 367,000 in 2011.

Illegal aliens constituted an estimated 7.3 percent of the state’s population. It is the third highest percentage of any state in the country, totaling nearly 2.6 million. More than half originate from Mexico.

The last four of those counties have significant agricultural industries that depend on manual labor.

The main ancestries of California’s residents in 2009 by survey:

These are some of the major cities in the state.

Other Destinations and Parks

California’s proximity to the Mexican border makes it easy for people to go to Mexico and vice versa. Visitors should be cautious while in areas near the border.

Thousands of U.S citizens visit Baja California, Mexico from Southern California every year. The majority of travelers are returning from an enjoyable experience.

However, a minority of travelers do experience difficulties and serious inconveniences while traveling to Mexico. If you are driving there (probably not a good idea) be sure you have auto insurance that covers you in Mexico.

Before traveling to Mexico, ensure that you have the proper documentation. Be familiar with the recommendations for foreign travel. Check with the U.S. Department of State and Bureau of Consular Affairs.

There are six border crossings between California and Mexico. The United States operates a consulate in Mexicali.

This is just a small sample of what’s here in California. There are lots of attractions to visit and enjoy and so much more. Read the articles below for more information.