You are here: Home / Travel Quotes

Travel Quotes for any type of Traveler

Movement of people or objects (such as airplanes, boats, trains cars and other conveyances) between geographical locations is considered Travel.

The locations could be relatively close or far away in distance. A daily commute is also travel, but usually when one considers travel they mean much further distances.

People travel for all kinds of reasons including: 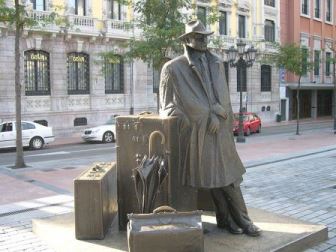 A statue dedicated to the traveler in Oviedo, Spain. Click image for larger view. 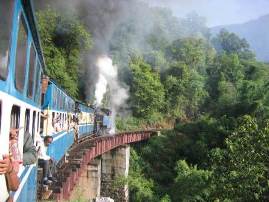 Train travel – Passengers on a train on a bridge of the Nilgiri Mountain Railway in Tamil Nadu, India. Note people ignoring dangerous safety precautions. People outside the cars and arms outside the windows, etc. would never be allowed in the United States Photo credit: http://www.flickr.com/photos/enchant_me. Click image for larger view.

Travel may occur by walking or bicycling, in cabs, or with vehicles such as public transportation, automobiles, buses, trains and airplanes. It can be local, regional, national (domestic) or international.

A trip may also be part of a round-trip, which is a particular type of travel whereby a person moves from one location to another and returns or a one-way trip.

It could also be a one-way trip going or coming and use another method of travel the opposite direction, such as a plane trip to a destination and driving back to the original starting point in a car.

An example of this would be when I flew from California to Missouri last year and drove back home to Lake Elsinore California in a car.

In some countries, non-local internal travel may require an internal passport, while international travel typically requires a passport and visa. In some instances you must have valid passports for at least six months after you leave the country you are traveling to.

An example of this is in certain countries in Africa like Tanzania. Also depending on where you live and where you are traveling to there may be a requirement for one or more vaccinations or shots to prevent you from catching certain diseases like malaria.

Sometimes when going extremely long distances such as on a train or plane you will need to sleep while traveling. Of course if you are on a long cruise on a ship you know and expect to sleep on the boat during your cruise.

Short trips and usually on long trips you may cross a different time zone in which case the time will be an hour ahead on behind, depending on which direction you are going. Long trips on a plane crossing several time zones will often cause one to develop jet lag.