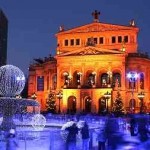 Visiting the New Ecostyle Fair in Frankfurt Frankfurt am Main, commonly known as Frankfurt, is the fifth-largest city in Germany. It is located in the German state of Hesse and is its largest city. Frankfurt is considered an alpha world city by virtue of being an international center for finance, commerce, tourism, education, transport and […]