Las Vegas Vacation – Something New There Every Time You Go

Population wise Las Vegas city has the largest in the state of Nevada. Las Vegas is an internationally renowned major resort city known primarily for gambling, shopping, fine dining, and nightlife. It is the leading financial and cultural center for Southern Nevada.

The city bills itself as The Entertainment Capital of the World, and is famous for its consolidated casino–hotels and associated entertainment. A growing retirement and family city, Las Vegas is the 31st-most populous city in the United States.

Las Vegas often refers to the city plus some areas beyond the city limits, especially the resort areas on and near the Las Vegas Strip, and sometimes the entire Las Vegas Valley. The 4.2 mi stretch of South Las Vegas Boulevard known as the Strip is mainly in the unincorporated communities of Paradise, Winchester, and Enterprise.

The major attractions in Las Vegas are the casinos and the hotels. Most of the hotel casinos are in the city’s downtown area, which has been the focal point of the city’s gaming industry since its early days.

The gambling and entertainment industry in Las Vegas is mostly focused in the Las Vegas Strip. The Strip is not actually located in city limits, but instead in the surrounding unincorporated communities of Paradise and Winchester. The largest and most notable casinos and buildings are located there.

When The Mirage opened in 1989, it started a trend of major resort development of the southern portion of the Las Vegas Strip outside of the city. This resulted in a drop in tourism in the downtown area. However, many recent projects and condominium construction have increased the number of visitors to downtown.

With so many new hotels, casinos, attractions and activities for your family, a Las Vegas vacation can be the most enjoyable experience you’ve ever had. Las Vegas is the city that never sleeps, and no wonder! You can go into a casino in the middle of the night and find activity.

Much much more activity if it is a holiday or even a weekend. First, there are a plethora of hotels to choose from.

The Flaming Hotel Plus Many Others

The one hotel that is in the center of it all is the Flamingo. With its giant pink Flaming atop the hotel, you’ll never lose your way on the strip.

With its beautiful rooms, pool, and amenities such as: a spa, sauna, Jacuzzi, restaurant, cable TV, VCR player, ironing board, refrigerator, and non-smoking environment; the Flamingo Hotel is centrally located on the strip and great for families.

Once you are settled in, there are a myriad of activities that you can engage in. In particular, a trip to Hoover Dam, Liberace’s Museum, Pinball Hall of Fame, and Madame Tussaud’s Wax Museum.

For entertainment, every hotel on the strip has something unique to offer. Visit Siegfried and Roy’s Secret Garden and Dolphin Habitat at the Mirage Hotel.

Take in the Sound and Light Show at the Bellagio Hotel. Dine at the Paris Las Vegas atop the replica of the Eiffel Tower. Watch a volcanic eruption at the Mirage.

Attend a show at the Treasure Island Hotel and Casino. Take a gondola ride at the Venetian Hotel. Take a ride on the Stratosphere at the hotel of the same name. Or you can attend the free Light Show on Fremont Street.

The kids will Love to Visit Circus Circus and Other Attractions

A Las Vegas vacation is not just for adults. The kids will love to visit Circus Circus where it is host to the largest Circus with shows. There are games that make this hotel as authentic as any carnival.

Check out Mandalay Bay Hotel’s shark reef. Here, kids will be engrossed in the species of sharks, crocodiles, eels, stingrays. They can participate in the petting pools that are offered.

Dining in Las Vegas is most affordable. You can select any one of the hotels on the strip and choose either traditional restaurant fare or buffet style meals which are inexpensive, yet plentiful. 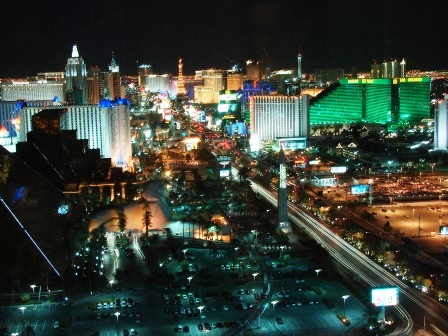 The kids can enjoy pizza or macaroni and cheeses at Spago’s located in Caesar’s Palace; or enjoy Italian take-out food from the Flamingo Hotel’s Ventuno.

You can also spend an evening dining at Roy’s Las Vegas, which has been touted as the best restaurant off the strip. The Hawaiian atmosphere and terrific kids menu is a plus for you and your family.

Top restaurants and hotels change with time. There is newer competition coming on line all the time. So be sure to get updated on the latest attractions and places to eat before you go. It’s easy to do on the Internet.

Although we live in Southern California Las Vegas is nearly a hop-skip-and-a jump away. We went there last week for almost a week. From Ontario California it was just a 3 hr, 5 minute drive across the mountains and through the Mojave Desert.

But we live 30 minutes from Ontario California so add another 25-30 minutes and you have less than four hours to lots of fun and entertainment that is second to none.

Even though we live a relatively short driving distance to Las Vegas we do have a vacation share there we stay in for free. We did, and in addition to that we got quite a few perks like free admissions to shows, free food, free shuttle service and a few other perks.

Las Vegas is not just a gambling town, but has emerged as one of the most entertaining destinations in the world, if not the best, for adults and children alike.

If you’ve never been there it is a must see city if you like shows, bright lights, tall buildings and especially want to try your hand in winning a few bucks in the casinos.

Charles is selling most of his valuable domain names. He went on an African Safari in Tanzania, Africa where he wrote about it in these articles.