Visby Sweden – Gem of the Baltic

Every summer, a number of Scandinavians head out to Visby Sweden for some needed rest and relaxation.

During the summer Visby receives thousands of tourists every year.

Located on Sweden’s Gotland Island, the town is just minutes away from beautiful beaches and natural attractions. 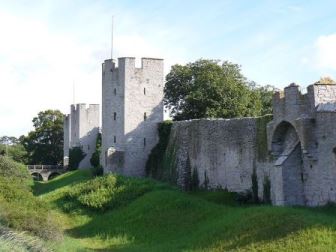 However, Visby is not the only a place of retreat, it is also one of the best preserved historical cities in the whole of Scandinavia.

You can imagine, Visby is not a big city, having a population of 22,593 people as of 2010. But it is by far the most populated locality outside the Swedish mainland.

Visby is also the only municipality seat of Sweden that is accessible only by boat and air traffic.

One of the standout features of the locality is its long stone wall named Ring Wall, also locally known as Ringmuren.

The wall is considered a valuable historical structure that has continued to surround and protect the city for centuries.

It is a 2.1 mile long stone wall, Ringmuren meaning “the Ring Wall”, that encircles the city and the old church ruins. 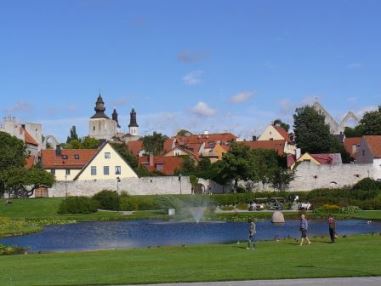 Almedalen. A park in central Visby near the seafront. Notable for Swedish political meetings during Almedalsveckan and for being the site of Visby medieval port.

With over 90 buildings including churches, trading houses and gables built mostly in the 12th century, the town is truly an inspiring and beautiful sight.

This is also one of the main reasons why it is hailed a UNESCO heritage site, and fondly called “the city of roses and ruins”.

The town receives the most number of visitors in August. It is also in the same month that the annual Medieval Week or Medeltidsveckan is celebrated.

This is a very special and enjoyable time for both tourists and locals.

During this celebration, themed events and activities such as theater and musical shows, medieval markets, jousting tournaments are held.

Perhaps, the most fascinating sight you will encounter during this festival is the huge number of locals dressed up in clothes replicating those worn during Medieval times.

A memorable day in Visby is comprised of a stroll on its charming cobbled lanes while passing the Cathedral and the other ruins, and going across Klinten where you will see a stunning view of the town against the shimmering water.

The town has plenty of quaint restaurants to dine in and its cafes set the perfect relaxing and calm ambience. 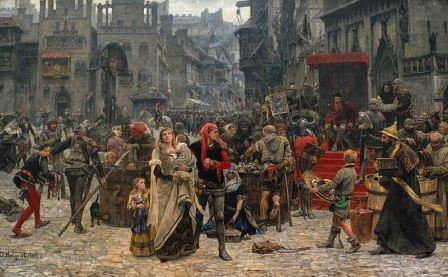 One of the most revered and iconic landmarks in Visby, that you should definitely visit, is St. Mary’s Cathedral, which was erected in the 13th century.

Also, please don’t forget to drop by the Historical Museum, to learn more about the captivating history of Gotland Island.

Once you are finished paying homage to the town’s history and heritage, you can head out to the popular areas of Wisbystrovet, Adelgatan and St. Hans for some serious shopping.

The area has a wide array of stores selling clothes, accessories, shoes, handcrafts, and furniture and gift items.

The area between the port and the district of Almedalen is where you can find old and new buildings mixed in together in visual harmony and perfect for your camera.

The vicinity is home to a university, Almedal Library and the Wisby Strand Congress Hall. The Botanical Garden will certainly delight and surprise you with its combination popular Swedish plants and trees and the exotic ones.

If you are up for some partying, the districts of Stora Torget and Strandgatan, which are both near the port area, are the main nightlife spots. 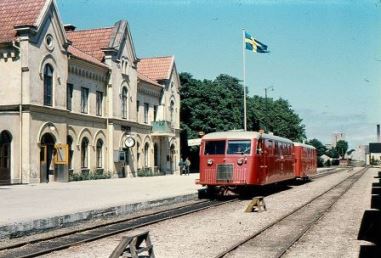 Visby allows you to reminisce the golden years of the Medieval age.

The town commands a free spirited atmosphere that attracts those who love culture, art, and life.

Here, you can rub shoulders with artists, poets, musicians and those who want to experience such atmosphere even if only for a short time.

There are no trains in service on the island. Visby railway station last year of traffic was 1960.

Visby is linked to the mainland of Sweden by plane and ferry. The three-hour ferry arrives from Oskarshamn in Smaland and Nynashamn, near Stockholm.

During the summertime, the ferry also runs to Grankullavik on oland. The ferry is run by a company and subsidized by the Swedish government.