Although not as famous as New York City, San Francisco, or Los Angeles; San Antonio Texas is still a great little city to come face to face with some history.

It’s one of America’s oldest cities. The city has a population of 1.3 million. Because of the mission, San Antonio is often called the “Alamo City.”

Even though San Antonio may not be able to match some of the more popular big cities in number of visitors it is nevertheless a popular tourist destination.

San Antonio has a huge influx of tourists and is visited by approximately 26 million tourists per year according to the San Antonio Convention and Visitors Bureau.

Some Statistics about San Antonio Texas

The city is about 75 miles to the southwest of Austin, the state capital. It is also about 190 miles west of Houston and about 250 miles south of the Dallas/Fort Worth area.

The second fastest growing from 1990-2000. The city is located in the American Southwest, the south–central part of Texas, and the southwestern corner of an urban region known as the Texas Triangle.

San Antonio was named after a Saint

San Antonio was named for Saint Anthony of Padua (and is Spanish for “Saint Anthony”), whose feast day is on June 13, when a Spanish expedition stopped in the area in 1691.

It is famous for Spanish missions, the Alamo, the River Walk, the Tower of the Americas, the Alamo Bowl, and Marriage Island. The city has SeaWorld and Six Flags Fiesta Texas theme parks.

It was colonized by Spain in the early 1700’s and since then Native Americans, Old Mexico and the Deep South have mixed and blended to make for an interesting city.

During its history San Antonio grew to become the largest Spanish settlement in Texas, and for most of its history, the capital of the Spanish, later Mexican, province of Tejas.

The Alamo; the Number One Tourist Attraction

Start your visit to San Antonio with a little history…. the Alamo. Probably everyone here in the U.S. has heard of it or seen old westerns featuring the battle at the Alamo. It’s undoubtedly the number one tourist attraction in the entire state of Texas.

The Alamo was built in the 18th century as one of San Antonio’s five Spanish colonial missions. Later it gained fame as the site of an epic 1836 battle during the Texas Revolution. 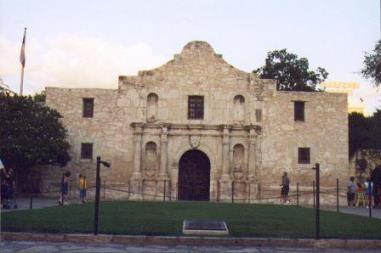 The Alamo Mission in San Antonio. The structure was added to the National Register of Historic Places in 1966.

That’s when Davey Crockett and Jim Bowie fought and died in the Alamo. When you first see it, you’ll think it’s smaller than you expected…. and it is! That’s because it was built as a mission and not as a fort.

Admission is free, though you will have to pay for parking at a downtown lot. It’s right in the heart of town, near the River Walk.

If you want to see more of the five missions beyond the Alamo, see San Antonio Missions National Historic Park. It will take you to the other four missions. You can travel from mission to mission on the eight mile Missions Bike and Hike Trail.

Every few blocks on the sidewalks there is a map of downtown San Antonio posted, making it easy to explore the Alamo and the River Walk.

The River Walk is the second most visited attraction. The River Walk or Paseo del Rio is also downtown. Twenty feet below the hustle and bustle of downtown streets, the River Walk follows the San Antonio River’s gentle bends.

Along it you will find restaurants, hotels, museums and historic sites. You can walk along the banks, or you can take a cruise on the river which goes on for a couple of miles while a tour guide gives you fun filled facts.

I think it’s my adventure, my trip, my journey, and I guess my attitude is, let the chips fall where they may. – Leonard Nimoy

One place you’ll find along the banks of the river is the historic district of La Villita. It was originally established by Spanish soldiers stationed at the Alamo. In 1835 the Mexican Army surrendered and gave Texas its independence at La Villita.

The next year was when the Battle of the Alamo was fought to try and win Texas back. More recently the historic buildings have been turned into restaurants and also galleries and shops for arts and crafts.

Historic Market Square is near downtown. Also known as the Mexican Market or El Mercado, it’s the largest Mexican market in the state. It pulsates with friendly people and bold colors. Stroll beneath the “papel picado” (Mexican tissue paper streamers).

Buy beautiful silver and turquoise jewelry…. handmade necklaces and earrings, belts and buckles from Mexico are here. Find Mexican candies and even buy a pinata to put them in. If you just want to soak it in, relax by the fountain and enjoy the sounds of mariachis.

With deep Latino roots, you will get some great Tex-Mex food here. You’ll also find some great San Antonio Texas barbecue. The culinary repertoire is large and diverse here, so don’t worry about going hungry. Just bring good walking shoes and an appetite for history and fun.

San Antonio is also home to the following attractions and more: 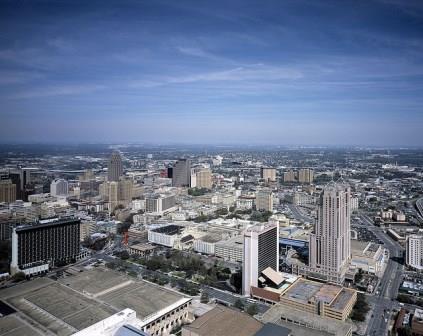 Downtown San Antonio from the Tower of the Americas.

Other things of Note

The city is home to the four-time NBA champion San Antonio Spurs and the annual San Antonio Stock Show & Rodeo, one of the largest in the country. It is also home to Fort Sam Houston, Lackland Air Force Base, Randolph Air Force Base, and Brooks City-Base, so it has a strong military presence.

There is Camp Bullis and Camp Stanley outside the city. Kelly Air Force Base operated out of San Antonio until 2001, when the airfield was transferred over to Lackland AFB and the remaining portions of the base became Port San Antonio, an industrial/business park.