The Rio Negro River is the largest left tributary of the Amazon. It is the largest black water river in the world. It is also one of the world’s ten largest rivers in average discharge. Rio Negro river is very high in fish species and richness.

There are about 700 fish species that have been documented in the river basin. It is estimated that the total is 800–900 fish species, including several unnamed species. Among these are many that are important in the aquarium trade, including the cardinal tetra. 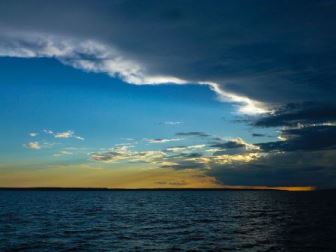 Sunset over the Rio Negro, a couple of kilometers upstream from Manaus. Photo Credit: Eiwe Lingefors

The river in the wet season floods the country far and wide.

Sometimes to a width of 19 miles, for long distances, and 400 miles upstream.

During this time, from April until October, it is a succession of lagoons.

It is full of long islands and intricate channels.

Conversely in the dry season Rio Negro is navigable for about 430 miles. That is from its mouth where there is just about a meter of water. Even though it has many sandbanks and minor difficulties, that doesn’t seem to stop traffic on the river. A small portion of the river forms the international boundary between Colombia and Venezuela.

Travel to the Rio Negro (Black River) is one of the best eco-tourism activities you can do while visiting Brazil. The river’s name originated from fact that it looks black from afar. However, the water actually reflects a dark brown coloring up close. This is due to the humic acid brought about by the incomplete breakdown of vegetation, containing the phenol substance.

Rio Negro is the largest remaining tributary of the great Amazon rainforest. It plays an important role in the fragile ecosystem of the Amazon. It presents excellent opportunities for visitors to explore and appreciate its natural gifts.

Cruising Rio Negro is one of the best experiences offered in the region. You can hire a small boat and go deep into the rainforest to see the fascinating wildlife inhabiting the area. Local outfitters regularly offer boat tours.

Tours come with with a knowledgeable guide to bring you to the best spots for wildlife viewing. It’s not only animals that are amazing to see, but also the flora around the river. They do not only visually enrich the region but also serve as medicines for the locals tribes. 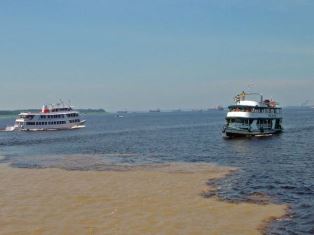 The mouth of the Rio Negro at the “Meeting of Waters”: the dark Rio Negro meeting the silty Amazon River. Photo credit: Mariordo

Some companies operate motor yachts for a more luxurious cruising on the river.

The advantage of traveling on this type of boat is that it has facilities like salons and bathrooms.

It also has observations decks, which will make your trip more relaxing and more comfortable.

The nearest Brazilian city to Rio Negro is the Manaus. The city has become a jumping point for Black River cruises. It is situated at the confluence of the Negro and Solimões rivers.

It is the most populous city of Amazonas, according to the statistics of Brazilian Institute of Geography and Statistics, Manaus is a popular ecotourist destination. The population in 2012 was 1.85 million people.

It is the most populous city in North Region and seventh most populous city of Brazil. Manaus was known at the beginning of the century, as Heart of the Amazon and City of the Forest. It is also possible for you to arrange a river cruise from the Rio de Janeiro beaches.

If you are a bird-watching enthusiast, Rio Negro is a perfect place to indulge your hobby. The river creates suitable conditions for various bird species. Most birding excursions involve forest hikes.

The hikes will allow you to appreciate the unique tropical surroundings. You can even join bird-watching tours conducted at night if you are feeling more adventurous.

Fishing in the Rio Negro

Fishing is another outdoor activity that attracts visitors to Rio Negro. The area is also home to a vast number of fish species. The most notable of them is the Peacock Bass. A number of anglers find fishing in Rio Negro an extraordinary experience. Mainly because the fishing is done mostly in tributaries and huge lagoons.

Like most activities in Rio Negro, your fishing experience will be very much enhanced if you have a local guide. Such a guide who knows his way through the forests and mangroves to find the richest fishing spots.

More than a day trip?

With all the fun activities you can do in Rio Negro, sometimes a day trip is not enough. Fortunately, there are varied accommodation options around the river’s vicinity. Such accommodations allow you to conveniently prolong your Amazon exploration for several days. If you seek comfort and style, then book at one of the hacienda-style hotels on the Rio Negro river banks and around Manaus City.

As an alternative, you can also stay in tourism lodges close to the river. These lodges not only provide basic accommodation, but also offer activities. Such activities as canoeing, horseback riding and rainforest expeditions.

Such expeditions allow you to learn more about or take part of the conservation efforts to ensure that Rio Negro can still be appreciated by future generations.