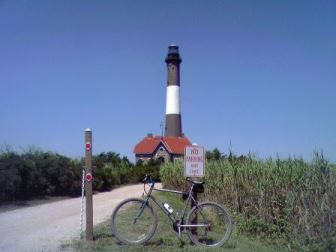 Imagine a relaxing, virtually car-free, unique travel destination virtually right next to many millions of people, yet separated just enough so they don’t interfere with such a hard to imagine paradise. Hard to believe, isn’t it? But it’s true. There is a paradise in of all places, next to New York City, and it’s not the very posh upper-class Hamptons. It’s Fire Island New York, and it lies off Long Island’s southern coast, a mere stone’s throw east of Manhattan.

The island is approximately 31 miles long and varies between 520 and 1,300 feet wide. The actual land area of Fire Island is 9.6 square miles. Fire Island is the large center island of the outer barrier islands adjacent to the south shore of Long Island, New York and is part of Suffolk County.

It lies within the towns of Babylon, Islip, and Brookhaven, containing two villages and a number of hamlets. All parts of the island not within village limits had a permanent population of 292 at the 2010 census, although that expands to hundreds of thousands of residents and tourists during the summer months.

Except for the western 4 1/2 miles of the island, the island is protected as part of Fire Island National Seashore. Robert Moses State Park, occupying the remaining western portion of the island, is one of the popular recreational destinations in the New York City area.

The Fire Island Lighthouse stands just east of Robert Moses State Park. A memorial to TWA 800 is located on the eastern end at Smith Point County Park near where it crashed.

Cars to – not through the island

The island is accessible by automobile near each end: via Robert Moses Causeway on its western end, and by William Floyd Parkway (Suffolk County Road 46) near its eastern end. Cross-bay ferries connect to over 10 points in-between.

Motor vehicles are not permitted on the rest of the island, except for utility, construction and emergency access and with limited beach-driving permits in winter. The island and its resort towns are accessible by boat, seaplane and a number of ferries, which depart from Patchogue, Bay Shore and Sayville.

The island has many pleasant surprises up its sleeves to an unknowing traveler. Aside from its noticeable serene and calm environment, you will not see any motor vehicles on this 32-mile stretch; and there are only a few paved roads. The main modes of travel around the island are by bicycle or on foot.

This, however, is a welcome change, granted that it’s quite near the busiest city in United States. Tell me where else in the United States are cars not allowed? There may be a few, but certainly not many, if any others and none that I know of.

Fire Island National Seashore is a government area that encompasses 26 miles of the island. This huge forested piece of land is popular for seasonal camping. There are seventeen headstrong and unique communities that occupy the island. Two of which, have a predominant gay population.

These communities, namely Fire Island Pines and Cherry Grove attract a number of visitors every year, not only due to the sexual orientation of the population but because of the town’s gorgeous architecture and wicked nightlife.

The communities on the western portion of the island are known to be great vacation spots. One of them is the Ocean Beach, which has the most number of residents as well as entertainment venues and commercial establishments. In addition, you will find a wide range of dining options in this community as it is packed with different types of restaurants.

This is also the place to be when you want to shop or go bar-hopping. The beach in Atlantique is an ideal choice for those who just want to spend a day or weekend on Fire Island. It has a beautiful marina, beaches and amenities like hot showers and snack bars. The beach radiates a more casual and family-friendly vibe.

If you are visiting the island for a longer period of time, consider staying in state parks, as they are at the end of the island and are in close proximity to the island’s beautiful sandy beaches. The eastern end park is called Robert Moses State Park. Here, there are plenty of activities to enjoy.

You can fish, swim, surf, kite board, or just arrange a relaxing picnic by the shore. You may even test your golfing skills at the park’s 18-hole pitch and putt golf course. While in Robert Moses, do not miss the chance to visit the charming 19th century Fire Island lighthouse, situated at the eastern section of the park.

The old maritime Sunken Forest located at Sailor’s Haven is a popular natural attraction, which can be explored on a one day itinerary. The forest earned its name because it lies in the lee of a sand dune that appears to be below sea level.

Tours around the forest are conducted daily and are provided by park rangers. It is also possible to hike some forest trails yourself, with the aid of a trail guide that is provided free to the public at the visitor’s center.

A 2009 beach renourishment program was credited with saving the island from the full effects of Hurricane Sandy in 2012. Still, however, Fire Island was heavily damaged in the high tides associated with Hurricane Sandy.

This included three breaches around Smith Point County Park on the sparsely populated east end of the island. The biggest breach was at Old Inlet in the Otis Pike Wilderness Area just west of the park.

Officials have been debating whether to close the breach and let nature take its course as it has been flushing out the Great South Bay. However, residents of the bay front communities have noted increased flooding since the storm.

Officials have moved to close the other two breaches which are on either side of Moriches Inlet, one in Cupsogue County Park and the other one being in Smith Point County Park.

Have you been to Fire Island New York?   If so, add your insights below about this unique travel destination.

Check before you go

So before you venture there for a quick vacation getaway to this unusual travel destination, find out the latest information about the island.

Fire Island New York can be reached from the main land by crossing either of the two bridges on the island, which are the Robert Moses Causeway on the island’s western side and the William Floyd Parkway on the eastern side. There are also daily ferry trips to different parts of the island.