You are here: Home / Rome Italy / The Roman Site of Ostia Antica

Perhaps one of the most exciting things I’ve done in Rome is visit the ruins at Ostia Antica. They are some of the best preserved ruins to date.

With its impressive Forum, large baths complex and more than one Mithraeum (a temple of Mithras). You will need a good half day or more to walk around the Ostia ruins at leisure.

Great for exploring, these ruins are so detailed that you can really imagine what it would have been like to live in this seaside port. 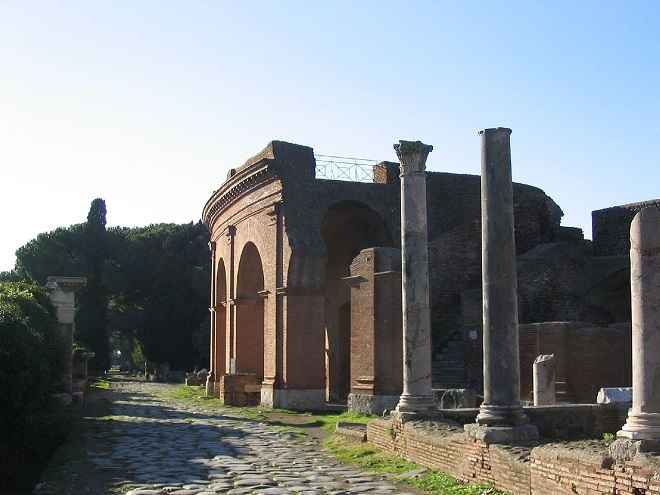 The theater as seen from the ancient main road.

The fishmonger’s marble slab and the bar with its wares illustrated on the wall. Don’t forget the communal public toilets and the residential villas with peaceful courtyards.

Almost all ruins of Ostia Antica were unearthed in the 19th and the first half of the 20th century. The first systematic excavations, initiated by pope Pius VII, were carried out by Petrini in the years 1801-1805.

As opposed to Ostia Antica, Ostia is a large neighborhood in the XIII Municipio of the comune of Rome, Italy. Ostia (also called Ostia Lido or Lido di Roma) is also the only municipio of Rome on the Tyrrhenian Sea.

Many Romans spend the summer holidays there. Sometimes it is confused with Ostia Antica, an archaeological area that is nearby. The population of Ostia is about 90,000 inhabitants.

Nowadays, due to the expansion of the city, only the Park of Castelfusano separates Ostia from the other quarters of Rome.

Reach Ostia using the Metro or by Boat

The best way to reach Ostia is by using the metro. You can travel from Rome in the morning and be at Ostia within half an hour. Trains leave at station Piramide.

Get off the regular metro at Piramide, go up the escalator, turn immediately left. Then go down the steps into the Roma-Lido station. Trains also leave at station Magliana. But we advise Piramide: this way you’re sure to find a seat on the train.

A normal metro ticket will suffice for the entire journey. You need to get off at the Ostia Antica stop which is about 20minutes from the city. For a more scenic route, Ostia is also reachable by boat. You can buy your ticket to take the boat at the info point. It is located near the Tevere river, in front of Castel San Angelo.

The town of Ostia Lido today is a very different place. A place popular with tourists and young people, Ostia is now a modern, tourist driven resort. Although it may not be everyone’s cup of tea, it can’t be denied that it has a very cool party scene during the summer.

In the summer months, Romans love to hit Ostia’s beaches by day. They want to enjoy the sun in one of the many paying beach establishments. Or maybe at the free beach of Castel Porziano).

By night many Romans venture out to mingle and party in one of the many clubs on the Ostia main sea strip. If you want to experience the fantastic nightlife at Ostia why not rent a Rome apartments or Rome hotels and take a short break.

Tourist Season in Ostia starts around May

The season in Ostia starts picking up around May. In June most of the clubs start opening their doors to Romans and tourists. There are open air dance floors.

One of the most popular spots is the Shilling. Visit the Spiaggetta, the Open Bar (where you can sip cocktails by the pool).

Or go to the Faber beach (where people like to sit directly on the sand with a bottle of beer and listen to music).

Twinty Karat is a long-time writer and Ayurveda lover.