Automobiles, do you like them? What about how people lived in America before the present time? If you do, you can combine the two by a Henry Ford road trip to Dearborn Michigan.

This would be a great drive if you are within a couple of hundred miles of Dearborn. Great if you are passing by on your way to another destination.

From its humble beginnings Dearborn grew into a manufacturing hub for the automotive industry. The city was the home of Henry Ford and is the world headquarters of the Ford Motor Company. It has a campus of the University of Michigan as well as Henry Ford Community College.

The Henry Ford and Greenfield Village

Wouldn’t it be great to know all about the car, and how it came to being? You don’t have to be a car enthusiast to appreciate The Henry Ford. It’s also known as the Henry Ford Museum and Greenfield Village. More formally as the Edison Institute. 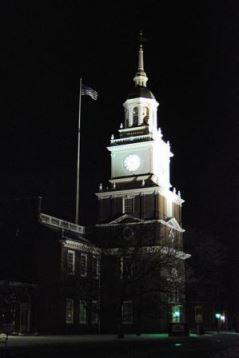 Museum clock tower, at night. The building is a replica of Independence Hall in Philadelphia. Image credit Dave Parker

Many things having to do with American history and not just car history can be found right in Dearborn Michigan. It is just a hop skip and jump away from the place where the automotive industry was born.

The best part is there are many different areas for you to explore, so there is something for everyone.

Henry Ford Museum began as Henry Ford’s personal collection of historic objects, which he began collecting as far back as 1906.

Today, the 12 acre site is primarily a collection of antique machinery and pop culture items. Also of course automobiles, locomotives, aircraft, and other items. The museum also features an IMAX Theater, which shows scientific, natural, or historical documentaries as well as major feature films.

Henry Ford said of his museum:

“I am collecting the history of our people as written into things their hands made and used…. When we are through, we shall have reproduced American life as lived, and that, I think, is the best way of preserving at least a part of our history and tradition…”

The Henry Ford Museum is a modern American History museum. For the most part it is self-guided. But there are usually staged demonstrations for certain exhibits.

There’s a rotation of interesting exhibits on various aspects of American culture. Exhibits from manufacturing to profiles on certain generations. Although some are pretty regular staples of the museum, for obvious reasons.

Given that you are at The Henry Ford, you would expect a good range of cars. Well you won’t be disappointed. The array of cars is simply staggering.

One of the most amazing on display are the presidential limousines. It includes the very same limo President Kennedy rode in and made famous on that fateful day when he was assassinated.

Moving from cars to another presidential item is the very chair President Lincoln was shot in. You’ll see some discoloration on the chair itself. Some people think this is blood from Lincoln. But it’s not.

It is residue from the many people who sat in the chair and wore it out. There is also a nice variety of planes. They include a few of Howard Hugh’s planes and a replica of the Write Bros plane. There is also Thomas Edison’s laboratory, the Wright Brothers’ bicycle shop, and the Rosa Parks bus at the museum.

Interesting items in the museum 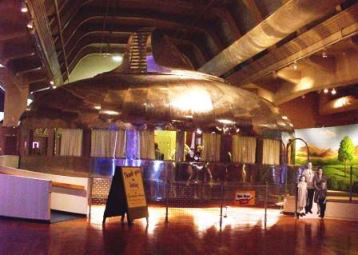 The museum was first run by Ford Motor Company itself. In lieu of a factory tour there was a ride which simulated what building a car would be like – with you as a car.

Walk through houses of the past in Greenfield Village

The Henry Ford complex is the largest indoor-outdoor museum complex in America. Greenfield Village has 240 acres of land. However, only 90 acres are used for the attraction. The rest being forest, river and extra pasture for the sheep and horses.

Nearly one hundred historical buildings were moved to the property from their original locations. They are arranged in a “village” setting. 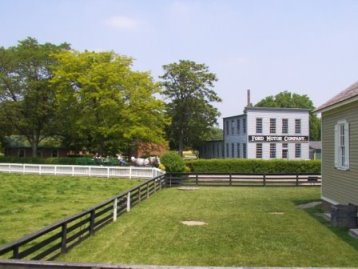 The museum’s intent is to show how Americans lived and worked since the founding of the country. The Village includes buildings from the 17th century to the present.

Many of which are staffed by costumed interpreters. They conduct period tasks like farming, sewing and cooking. A collection of craft buildings such as pottery, glass-blowing, and tin shops provide demonstrations. While at the same time producing materials used in the Village and for sale.

This gives you a feel for how it actually was way back when. It is truly an eye-opener to see how people lived in the distant past in this country. Does it make you feel fortunate to live in times like today. Or do you wish you could have experienced life back then?

Some notable homes and buildings include:

Normally on road trips it will be during fair weather when it is pleasant. That definitely leaves out winter. Winter is no time to be driving and sightseeing in the Michigan area.

Here are some of the events held at the village during those times. Be sure to check before you leave on your trip. You need to be sure the event is still being held.

Each year the Village celebrates the Memorial Day weekend with its Civil War Remembrance. This event features more than 400 Civil War re-enactors. They are invited to camp in the Village over the weekend. Attractions include infantry, cavalry, and artillery demonstrations. There is also a re-enactors’ ball and special memorial events. The events commemorate the service of United States military veterans.

Motor Muster is one of two car shows that take place annually in Greenfield Village. Motor Muster is traditionally held on Father’s Day weekend. This event currently features cars built from 1932–1976. Between 600-800 cars are featured. Special attractions include car judging. There is ad Pass in Review in which experts discuss highlights of the passing cars.

During the summer, there is a daytime Discovery Camp for children in grades 2-9. Children participate in apprenticeships, canoeing, glass blowing and other age-dependent activities. 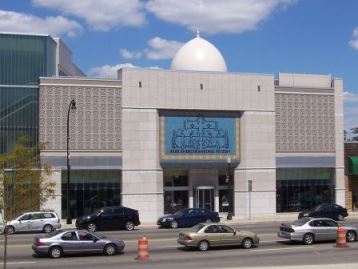 For four nights around the Fourth of July, the Detroit Symphony Orchestra performs a patriotic concert on Walnut Grove in the Village. Attendance ranges from 5000–9500 per evening.

Features cars from 1890–1931 and is the event from which Motor Muster was spun off. Old Car Festival has been held on the first weekend after Labor Day since 1955. This event features 500-700 cars. Special events include car judging, Pass in Review and the gaslight tour (Saturday night only). There are also car games (races) on the Walnut Grove field.

Other places of note in the city

The ethnic backgrounds of Dearborn residents are primarily European or Arabic. The city’s population includes 40,000 Arab Americans. The Arab American National Museum is located in Dearborn. Ford Motor Company also has its world headquarters in Dearborn. Henry Ford’s Fair Lane estate is in Dearborn Michigan too.