The Sepik River is Papua New Guinea’s version of the Amazon in South America. It is the longest river on the New Guinea Island situated in the East Sepik Province. This navigational river is full of surprises and treats for those who are adventurous enough to visit one of the most remote places in the world. 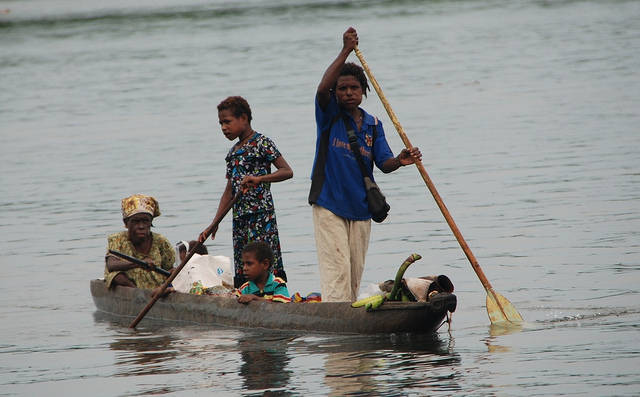 There are two main ways to cruise the Sepik River. If you want to keep it simple and more traditional, you can try the dugout canoe trips offered by outfitters like Diversion Dive Travel.  Larger boat cruising is the other option, which is known to be more comfortable and luxurious. There are a couple of companies that offer Sepik River cruises regularly, so you will have little trouble finding a trip that will suit your needs and budget. The cruise around the River can take one to two full days. Most of the time, you will be exploring the numerous waterways and tributaries of the Sepik, as well as visit some Sepik villages.

One popular river boat and floating lodge is the MV Sepik Spirit, which is usually berthed in the middle section of the river at Kamininbit village.  The river cruise on this boat exposes guests to various cultural touring programs.  Some usual sections of the river frequented by boat cruises are Chambri Lakes, Blackwater Lakes, and the Middle and Upper Sepik villages. During your cruise stops, you will be given the time to interact with the locals and learn more about their lifestyle. If you decide to stay a couple of days around the river area, there are also a handful of accommodations, which can be arranged through travel agencies. Some of the popular and more luxurious ones include the Wilderness Lodge and Karawari Lodge.

The Sepik River has retained its natural gifts and you will see no major modern infrastructure, forestry or mining facilities around the area. As a result, Sepik River is considered to be the biggest uncontaminated freshwater wetland system within the Asia-Pacific region. Cruising the Sepik River allows you to experience an incredible array of wildlife including exotic birds and crocodiles, which are regarded by the native as water spirits.

The native villages found in Sepik River have maintained their traditions, culture and exceptional artistry, passed on from one generation to the next.  Most of the tribal villages, with the exceptions of Pagwi, Timbunke and Angoram, are only accessible through the River, thus, they have little exposure to modern living.  While exploring these villages, you will become acquainted with the Sepik love for the arts mixed in with their idea of myth and magic.  The lovely pottery, wood carvings and other tribal art items displayed in the villages promise to impress; while the villagers’ belief and respect in spirits will not fail to fascinate you. This high regard for spirituality and mysticism is evident in their ceremonies and spirit houses.

Not so long ago, the Sepik villagers participated in human head hunting, eating the flesh of their enemy and keeping their skulls as trophies.  Each village will have a men’s house where meetings, initiation and ceremonies are conducted. You will see young men whose backs are cut to resemble crocodile markings.  This painful marking is an important ceremony for men as it signifies their strength and power.

A visit to the Sepik River and it’s villages offers visitors a wonderful opportunity to step back in time and experience a very unique part of the world.